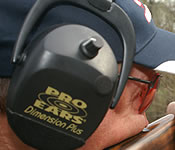 Not a Typical Shoot

Bigger & faster shells must be betterâ€¦right?

When choosing ammunition for clay targets or game birds, it’s important to match the ammo qualities to the specifics of the target or game. Far too often, shooters buy heavy recoiling loads with a heavier shot charge than necessary. Recoil is the enemy of good shooting. Target shooters generally shoot far more than those who mainly hunt game birds. Repeated high volume shooting with heavy loads may lead to a variety of problems & will certainly be the cause of missed targets.

I find that most novice shooters have no idea about how to determine velocity of shotshells by reading the label on the box. In general, choose a very low or moderate velocity shell to begin with. This will make the shooting experience much more pleasant for the newer shooters & is satisfactory for advanced shooters as well.

If the velocity is shown is FPS, try to find shells that are in the 1145 - 1200 FPS range. Some of the shells found in "big box' stores are often over 1400 FPS. These have way too much recoil to make shooting comfortable. If no velocity figure is shown, steer away from MAX loads. Even field loads are often too fast to be comfortable. In addition, choose 1 ounce instead of 11/8 ounce shells for 12 gauge ammo if available. You'll be amazed at how well 7/8 ounce shells perform, if you can find them.

As far as shot size goes, #8's & 71/2's & even 9's will do in the beginning. As shooters improve their game, they normally form opinions about which loads they prefer. But, in the early stages, low velocity ammo will make your experience much more pleasant.